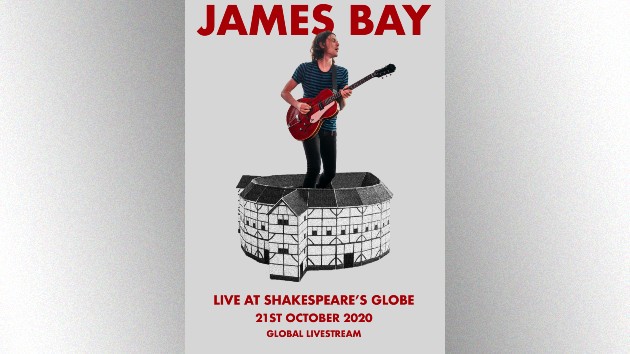 William Shakespeare once wrote, “All the world’s a stage,” but tonight in London, James Bay will be performing on Shakespeare’s actual stage. He’s doing a full production livestream concert from Shakespeare’s Globe Theatre, the modern reconstruction of the historic venue where plays like Hamlet and Macbeth were first performed.

“It’s amazing,” James tells ABC Audio of the Globe, adding, “You step through the doors and it all goes quiet…it’s just a wonderful space to project in.”

“The show is going to be incredible, there will be stuff that you haven’t heard me do before…and I’m gonna perform some songs in some different ways that haven’t been experienced before,” James explains.

In addition, if you spring for the more expensive ticket package, you’ll get to see James “going into a really fancy different room,” where he’ll perform his debut EP The Dark of the Morning, acoustically for fans.

The “Let It Go” singer says the event’s highlight will be finally getting to play onstage with his band, which he hasn’t done since the COVID-19 pandemic began.

“It has been completely euphoric, genuinely, to be in a space and rehearse with the band,” he gushes. “It’s wonderful! So it’s been really sort of a joyous thing.”

The only thing downside of the whole experience, James says, is the fact that due to the pandemic, they’ll be playing to an empty theater.

“Nothing will ever, ever take away from the sheer glory of, and magic of, the experience of crowd and performer on stage,” he says. “So it’s bizarre.”

Tickets are available here for the show, which starts at 8 p.m. ET/PT for North American fans.